Tweet
By Matt Marshall, Jazz Inside NY, March 2010
With a grit and abstraction that belies his fresh- faced looks, Alex Terrier’s sound on saxophone – be it soprano, alto or tenor – is one to sear and move the soul (perhaps down paths you’d rather not travel). Add to that a preternatural ability to compose lively, ambitious pieces of music that regularly shift their textural footing and twine divergent instrumental voices into a satisfying cord of licorice, and you have one hell of a sophomore effort. On four of the tracks here, Terrier’s quartet is aided by guitarists Akira Ishiguro and Edouard Brenneisen (handling two tracks each), who provide both spatial and aggres- sive electric lines to the melodic Terrier themes. And throughout the album, pianist Roy Assaf and bassist François Moutin tangle in a delicious, other-worldly squabble that never fails to thrill, most notably on “Le Miroir des Anges Déguisés” and “The Dark Side of Democracy.” Spirited, challenging, piercing and upliftingly musical, Roundtrip broadcasts Terrier as a traveler to reckon with.


Icon
Parisian born, New York based saxophonist Alex Terrier brings his good looks and youthful enthusiasm to bear on his self-produced sophomore release, a lengthy original album of 11 energetic tunes that demonstrate a surprising sophistication. Terrier thrives in richly varied musical contexts, his compositions play with time and shifting tempos reminiscent of his influences, saxophonists Wayne Shorter, Bobby Watson and Ornette Coleman. His fearless quartet includes pianist Roy Assaf, bassist Francois Moutin and Steve Davis on drums, each active on the New York jazz scene and open to Terrier’s complex and often dramatic narratives. “Round Trip” sounds like a record from a more mature artist; its well recorded and sharply performed, abundant with novel ideas and although a bit too long to consume all at once, Terrier has fashioned a fresh and close-to-dazzling statement that’s worth listening to.

Bill Mikowski - JazzTimes
On the burning title track, Parisian-born saxophonist Alex Terrier comes out of the gate wailing on alto, with pianist Roy Assaf, bassist Francois Moutin and drummer Steve Davis providing interactive sparks along the way. They settle into more reflective terrain on “The Spirit Will Not Descend Without a Song” and the poignant “Departure,” then tackle the rhythmic puzzle “E.S.B. and Ecstasy.” Terrier is a compelling balladeer on tenor on “Song for Keli” and a first-rate composer on the stirring suite “Le Miroir Des Anges Deguises,” the lyrical “Tompkins Square” and the frantic closer, “The Dark Side of Democracy.”


Richard Kamins, All About Jazz New York
Roundtrip - Alex Terrier New York Quartet (BCR) - French-born saxophonist Alex Terrier's 2nd CD as a leader features 11 original tunes and is a delight from beginning to end. Terrier, who plays soprano, alto and tenor saxophones, plays with great maturity and drive.
The title literally bursts out of the gates with the drive and feel of a Jackie McLean piece from the early 1960s.
Yet, Terrier and his associates (pianist Roy Assaf, bassist Francois Moutin and drummer Steve Davis) do not “play it safe" - the music moves from pretty ballads like “Song for Keli" to poly-rhythmical treats such as “E.S.B. and Ecstasy“ to multi-sectioned works like “The Dark Side of Democracy."

There are moments that remind this listener of Wayne Shorter's recent Quartet music in the way the musicians move through the melody and improvisations, each player being both supportive yet moving the music forward. The addition of guitarists Akira Ishiguro and Edouard Brenneisen (on 2 tracks each) adds a new set of colors, the latter adding Bill Frisell-like tones to the intimate ballad “Departure“ and the former with a fine and fiery solo on “Le Miroir Des Anges Deguises“ (that shows the influences of both John Abercrombie and Kurt Rosenwinkel).

Terrier, a former student of Boston, Massachusetts- based tenor great George Garzone, has shown much growth from his 2007 debut, “Stop Requested." He has assembled a quartet of like-minded musicians, spent a good deal of time woodshedding his songs, and is developing his own sound. He's not afraid to “swing" and does not shy away from letting the music go in unexpected directions. Most of the tracks are built upon well-conceived melodies and that gives Terrier and his bandmates a good foundation for their solos and interplay. Judging by the high quality of this effort, I imagine the Alex Terrier Quartet is a formidable presence on stage.

Alex Terrier New York Quartet Roundtrip: The NYC residing Parisian saxophonist Alex Terrier self-released his second album Roundtrip last October. It's a very sophisticated, swinging kind of jazz and every song (all written by Terrier) has it's own personality, from the urbane, fluent beauty of "Tompkins Square" to the Ornette Coleman stream of consciousness of "The Dark Side Of Democracy." On top of that, Terrier's soprano sax is very distinctive, in a good---read, lyrical---kind of way. Roundtrip is solid from beginning to end.

ALEX TERRIER/Roundtrip: A New York sax man originally from Paris, Terrier plays with the energy of both jazz scenes and he has been racking up awards quite handily because of it. An album with so much on the ball it has to make you jealous even if you don’t play sax, this set of all originals is an accomplished work that delivers the goods so mightily you forget that he has a long road ahead of him yet. Certainly a young lion to add to your play list, he plays nu mainstream with a surety that comes with having nothing to prove and just letting the blowing flow. Hot stuff and a great new find.

"Roundtrip" is now on the playlist of RadioIO.com in the Real Jazz category!
http://www.radioio.com/channels/real-jazz 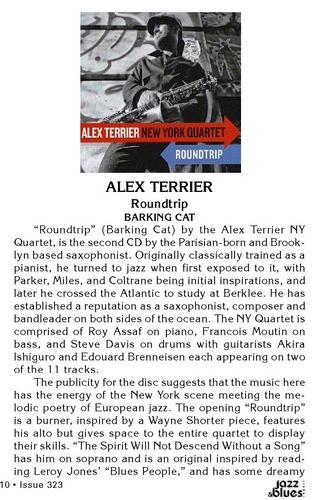 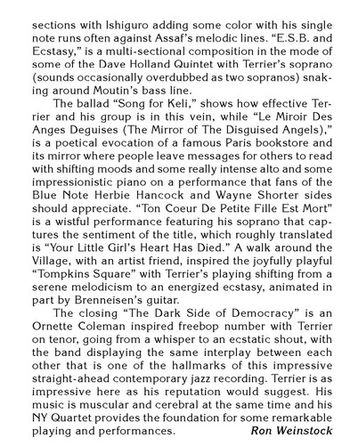